Medical symbol What is caduceus? Why is it used in medicine? - nbcbangla

Medical symbol What is caduceus? Why is it used in medicine? – nbcbangla

Medical_symbol What is caduceus? Why is it used in medicine? – nbcbangla 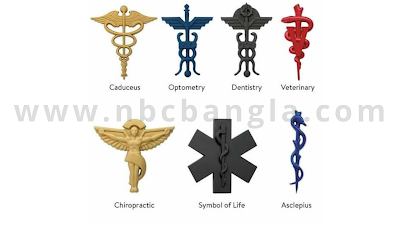 Let’s talk a little bit about it. According to Greek mythology, Hermes was one of the sons of the god Zeus. Hermes himself was a god. The symbol of Hermes was a flying stick-like object, wrapped around two snakes. Just like the first picture in the image above. It meant the relationship between business, rhetoric, conversation, medieval chemistry, alchemy, and knowledge. Hermes was actually a messenger. Who carried the message between gods and humans.

The god Hermes never had anything to do with medicine. It was first used in America in the late nineteenth and early twentieth centuries as a symbol of medicine.

The American Medical Corps needed to use a logo in the late nineteenth century. The person in charge then forgot that Caduceus was related to medicine and used it as a logo. Because he got confused between Rod Of Asclepius and Caduceus. The Rod Of Asclepius is mentioned at the end of the article.

Later, as Caduceus became more attractive to look at, it became very popular as a symbol of healing. This symbol started to be used due to a slight mistake and once established due to its popularity.

With this symbol is meant everything related to eye medicine. For example, eye examination, prescribing lenses as required, etc. This symbol is basically a Caduceus symbol. But the difference is that it has a pair of eyes at the top to understand what it is related to.

It is used as a symbol of dentistry. This symbol has another symbol on Caduceus like the image below.

And the sign that has a triangle shape on the outside is basically delta (Δ). Delta in Greek means “D” which means “Dentistry”. And in Greek Ο (omicron) means “odont” which means teeth.

It is also known as the Star of Life.

This symbol was designed by the US National Highway Traffic Safety Administration (NHTSA). In the United States, the symbol is used as evidence of any ambulance, medical assistant, or emergency medical personnel. It is also used internationally to refer to emergency medical services.

With the 8 arms of the Symbol of Life, the rescue workers are given 8 tasks

Detection: This means that the rescuer will first observe an incident, try to understand the problem, try to identify the level of danger and take steps to ensure the safety of the victim.

Reporting: The professional will be contacted and dispatched quickly to ensure emergency health care.

Response: In this case, the person who comes in contact with the person first will provide him with the necessary services including first aid.

On scene care: Immediate emergency services will provide the necessary immediate services as soon as they arrive.

Care in transit: A person engaged in emergency medical care will send the affected person to the hospital. Any ambulance or helicopter or any special system will ensure the safety of the affected patient. And will provide necessary services to the patient during the said transport.

Transfer to definitive care or transfer to final service delivery center: Special services will be provided in the hospital.